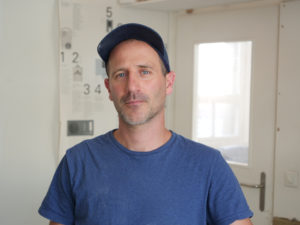 After completing his training in model making, Florian Hauswirth worked as a model maker and material researcher for Vitra. Later he studied industrial design in Aarau and subsequently worked for Barber Osgerby and other firms. In 2007, he co-founded the design collective «Postfossil». He now has his own label and works on projects with companies such as Tossa, Nodus and Manor, besides teaching object design at the Lucerne University of Applied Sciences and Arts (HSLU).

Florian Hauswirth was born in Zurich. After spells in Basel, Lausanne, New York and London he now lives in Biel. For the past ten years, he has been working there in a former factory building. Pro Helvetia paid the industrial designer a visit at his studio.

Sometimes he takes a large moulding cutter in hand, sometimes a pencil to make a sketch. Florian Hauswirth is both craftsman and designer. His creations, for which he uses a variety of materials and technologies, span product, furniture and exhibition design. The results include chairs made of steam bent wood, carpets with burnt-in patterns, and lamps with special LED technology.

His original training as a technical model maker still influences his work, and so his studio contains a large number of products in various stages of completion. Chairs are particularly prominent – ordinary chairs as well as three-legged and folding varieties.

In the context of its new «Culture and Business» design promotion programme, Pro Helvetia supported Florian Hauswirth in the production of a prototype for his lamp «Feuille», which functions both as a reflector and a diffuser. It is made of a flax composite created by a startup from Fribourg and special acryl glass, and is equipped with highly sophisticated LED technology.

In the video, Florian Hauswirth talks about his work and about what aspects of design are especially close to his heart.

Apply now for the matchmaking event until 12 February 2023